As we inch even closer to World Book Day 2019, here are a few more of my memories of the great times and all the carrying on that I organised for the local school classes. 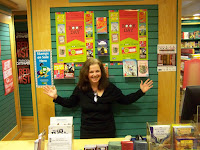 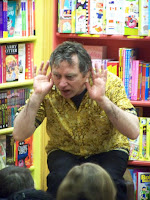 Rab Fulton made yet another appearance with his animated and hilarious Scary Stories for young folk. Featuring tales about his grandmother in Glasgow, I believe... 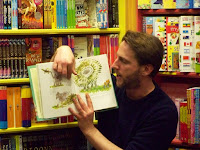 Dubray Books' own Ronan Quinn had the kids wrapped up in a few of his favourite stories  from Roald Dahl. Dirty Beasts or Revolting Rhymes, anyone? 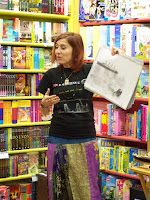 What an incredible treat it was to have Nicola Pierce arrive in Galway to tell us all about her fantastic (then new) book, Spirit of the Titanic! Not only did she read from the book (highly recommended, by the way) but she shared a wealth of information about the Titanics' story and the lives that were irrevocably changed by the doomed ocean liner. 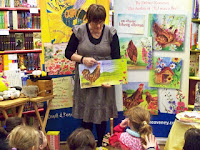 Dolores Keaveney made her way from Mullingar to enchant the children with her wonderful picture books about bees and  hens. And she also discussed their care and the importance of bees in the environment. 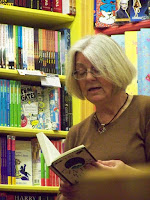 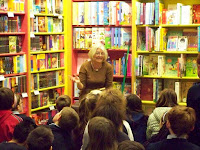 On the final day that week, it was an absolute pleasure and a real joy to welcome the wonderful Maeve Friel to Galway. Her books, Tiger Lily, Lantern Moon and Witch in Training were brought to life in events that included such things as an impromptu flying lesson (with a broom, of course.) Maeve has sadly since passed away, but none of us will ever forget that incredible day.


Moving along to World Book Day 2013...another incredible year for events. So many children arrived in the bookshop during the week that at one point, I lost count! But I do know they were all amazed, delighted, enthralled and enchanted. 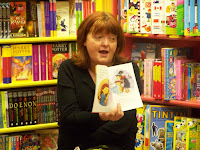 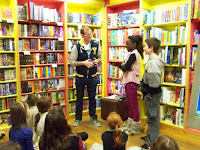 As well as my wonderful authors/storytellers who never hesitated to volunteer their time and skills year after year (like Trish Forde who came by to read from Frogs Do Not Like Dragons and promise of another Lily story) there was a brilliant surprise in store when Alan Early came in to share his exceptional books, Arthur Quinn and the World Serpent and Arthur Quinn and the Fenris Wolf. He also quizzed the children on Viking lore with his own 'game show', Who Wants To Be A Viking God or Goddess. It really was a great day! (For those of you that are wondering, attendance that particular day was 150 school children, bringing the total after 2 days to 267!) 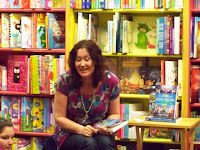 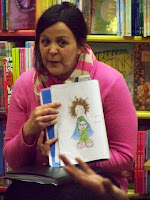 Next up, Maria Burke came to town to regale the kids with readings from The Ark of Dun Ruah and so much fascinating information on eagles, owls and her writing life.
Following Maria, illustrator Sadie Cramer visited two classes and told the about her adventures illustrating Chop, Chop, Mad Cap (author Juliette Saumande). She also involved them all in a workshop, during which they made their own 'secret identity' badges. Fantastic! 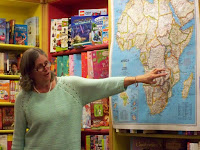 Author Paula Leyden arrived in town on World Book Day itself, armed with readings from her beautiful book, The Butterfly Heart. Paula spoke of many things African; including her life there, the land, the animals, the people, the diversity and the many, many languages. The kids were all enthusiastic and enthralled. 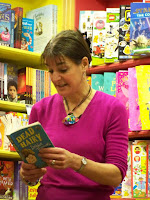 On the fifth and final day of this particular World Book Day Extravaganza, we were treated to the talents and imagination of Debbie Thomas. Debbie presented her wonderful, wild and brilliantly funny books, Dead Hairy and Jungle Tangle. There was much chat about writing, how her books came into being and some fantastic character creation. So much energy and laughter and so much unbridled joy...I didn't want it to end.

But now we must time-travel to World Book Day 2014, in which we were re-visited by many of our favourite authors and storytellers.Repeats, yes...but with new stories and books to share and new energy and enthusiasm for reading that was transmitted to every child in the audience! 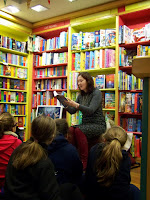 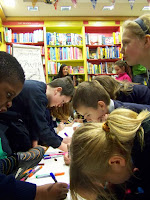 Maria Burke was back again, to read from The Ark of Dun Ruah and its' sequel, Protectors of the Flame.

Sadie Cramer was on hand to discuss what a story actually is and how to make them; she even had some of the children stand up and tell their own stories. Then, of course there was the big piece of paper rolling out and busy children drawing their stories. Fabulous workshop! 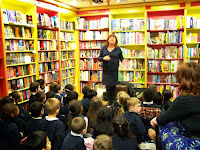 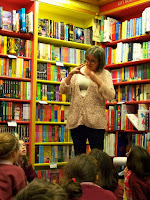 Trish Forde returned and this time gave a very dramatic recounting of an incident that lead to her becoming an author. We were all in stitches with laughter.

Paula Leyden returned to tell us even more about Africa and her book The Butterfly Heart. But there was more in store for the captive audiences with her new release, The Sleeping Baobab Tree. 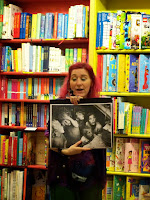 Our final visit from 2014 was the one and only Nicola Pierce; back again to talk to local school classes about her newly released book, City of Fate. Taking place during the siege of Stalingrad, it tells the story from the perspective of three different children who, somehow, manage to survive. (Of all her books, this one is still my favourite...such a powerful story.)

That wraps up part two of my World Book Day Through The Years posts. Watch this space for the third and final part, where some more exciting adventures will ensue. (At least I think it's the final part. I am still searching for World Book Day photos previous to 2009.)


But tell me, are you sure you're World Book Day ready? Have you all received your World Books Day tokens? These tokens will entitle each and every child who has one to a World Book Day Book of their choice. It's so important for children to have the chance to choose their own books, to own their own books. And these World Book Day books that are published especially for World Book Day go a long way to ensure that happens. Sadly, it has been my experience over the years that World Book Day is often the only chance some children have to own a book; to actually go into a bookshop and buy a book. The WBD tokens are worth the exact cost of one the the WBD books (£1 or €1.50 in Ireland)...so they are essentially, getting a book for free. Check out the website to find out more. 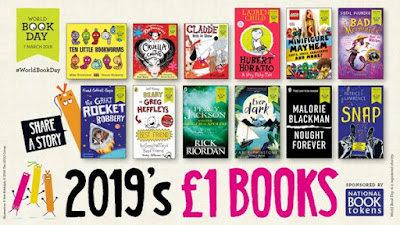