A Chat With Caroline Busher! 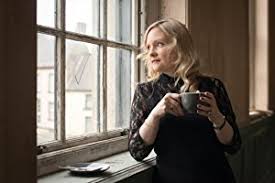 Last week, the Cuirt International Literature Festival was in town bringing a plethora of authors, illustrators and publishers in for one of the best literary events anywhere. With so many events and such a busy buzz about the place, it really can be difficult to catch up with all the people I wanted to see. So I was very, very lucky (and extremely happy) to meet up with the lovely and exceptional Caroline Busher.
Caroline is the author of two wonderful novels for young people; The Ghosts of Magnificent Children and the recently published The Girl Who Ate The Stars, both unique historical fiction with intriguing plot twists and featuring some haunting characters pulled through time. (For more on these books, you'll find reviews of both on the Irish Authors... page of this blog.) So while we were chatting and enjoying a lovely lunch, I couldn't resist asking a few related bookish questions.
I love historical fiction, and books that can take the past, make it come alive and bring it forward in time are the ones I find so incredibly beguiling. And it can be a difficult genre to promote, even though children and young people do find the past fascinating. So I had to ask....why historical fiction? 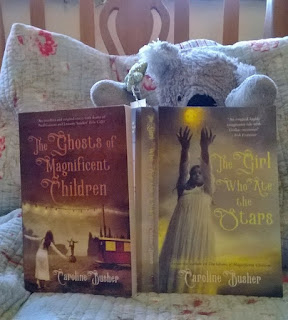 Caroline spoke of growing up as an only child and living in an old Victorian house, filled with echoes of the past. Spending much of her time with adults, she had plenty of opportunity for exploring. In the cellar, when she was eight years old, she found a pair of Victorian childs' spectacles in a beautiful 'coffin' case. She was filled with the wonder of this young persons' story; who were they, why did they need spectacles, why were they left behind...what was this persons' story? She still carries these spectacles with her today...a vibration of another time and someones' intimate vision. Caroline also has a love of vintage clothing and as she puts something on, believes that she is "wrapping myself in someone elses' story." She has a keen and deeply felt sense of the investment of anothers' life in the objects they leave behind and conjures their life, who they are, what they did through the creation of stories inspired by those objects.
Caroline also spoke of the cellar in her house and how people did actually hide there during World War II to protect themselves from the German bombs. This lead very neatly into The Girl Who Ate The Stars, which is centred around an actual event, when a German plane crashed near a small town in Ireland. It also heavily features wolves, or werewolves and the ancient fear and superstitions surrounding such creatures. Caroline is a fountain of knowledge about the history of wolves in Ireland, which was once called "Wolf Land". The last wolf in Ireland was said to be killed in 1786 near Mount Leinster. They lasted more than 300 years beyond those in England and Scotland and had truly thrived here, roaming everywhere in the vast forested land that Ireland once was. The chieftains in Ireland were known as "Wolf Men" due to their heavy beards and hairy appearance and valued the presence of the wolves. It is thought that this is one source for the legend of 'werewolves'. All of this was expertly woven into the The Girl Who Ate The Stars, giving what is essentially and World War II novel into an eerie and timeless legend.
Finally, I did have to ask about her use of ghosts and superstitions throughout these two books. Caroline spoke of how, even as a child, she was aware of the superstitions held by her family, and that now, living in rural Ireland, you can still find many of them still present, even if just as 'tradition' or carry-overs from a past (as a way of honouring it). Superstitions, she feels, were important as a way of bringing understanding in the world. This is changing, and, as Caroline says, needs to change, with reliance on such things disappearing as we gain understanding through other, more logical methods. While I thoroughly agree with her, I also am one who worries about losing the rich texture and colour superstition and the supernatural and its' influence over the past bring to the world. Thank goodness we have historical fiction to remind us.
Thank you very much, Caroline for meeting up and being so generous and lovely as always.
Caroline Busher is also the festival manager for the Towers and Tales Festival in the enchanted Lismore Castle this coming weekend. I cannot recommend a better festival to bring the magic and joy of books and stories into your life. She is also the Program Curator for Reader in Residence.
https://carolinebusher.wordpress.com/
http://www.towersandtales.ie/