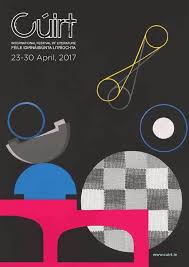 So, we bid farewell to the Cuirt International Literature Festival for another year...and it was fabulous. The childrens' authors/illustrators and storytellers that came for the Cuirt Labs were among the best and most interesting ever to share their knowledge, gifts and enthusiasm with so many of Galways' young people.
With the assistance of my new companion at Charlie Byrnes Bookshop, Left Behind Koala (LB) here is a photo of what was on offer, and in fact still available for the young, and not-so-young, to read, enjoy and explore. (Obviously, LB had his favourites....but it was very hard for a koala to choose.) 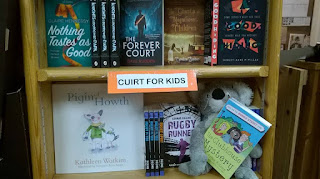 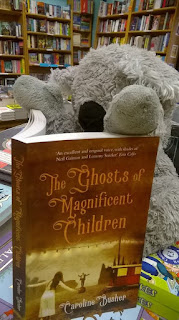 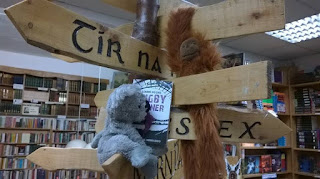 I want to add my personal thanks to all the authors, especially those who stopped in to say 'hi' and sign books. It was a pleasure to meet you all...and I can't wait to hear more from you!


I had the distinct pleasure of introducing the YA authors panel on Saturday the 29th; Shirley-Anne McMillan (A Good Hiding), Claire Hennessy (Nothing Tastes As Good and many others) and Dave Rudden (Knights of the Borrowed Dark and its' sequel, The Forever Court). While I don't have a transcript of each of their presentations, perhaps the transcript of my introductions will give you a taste for their work. If you haven't experienced their books yet, you really should. You will not be disappointed.
I can't wait to see what next year brings....


Hello and welcome to this afternoons’ Cuirt readings with Shirley-Anne McMIllan, Claire Hennessy and Dave Rudden. Many of you will have attended the Labs this afternoon and have experienced firsthand the energy, enthusiasm and knowledge these three have to offer. I’m sure you came away feeling inspired, with a regenerated excitement for reading and, hopefully, writing. I will introduce our authors in turn and they will talk about and read from their work. They are very interested in hearing from you and there will be time at the end for questions and comments. So, if you wouldn’t mind, please hold them until that time.


We begin with Shirley-Anne McMillan. Shirley-Anne was born in Lisburn, co Antrim and has lived in Northern Ireland all her life. She studied at Queens’ University, Belfast and Manchester Metropolitan University. While studying, she wrote poetry, picture books and articles for free, local arts publications. Shirley-Anne has written and performed with the Belfast-based arts group, Ikon for several years. She has an interest in social activism, in particular Northern Ireland peace initiatives and LGBT equality. Shirley-Anne has a keen eye for the concerns and lives of young people and has worked with them to seek to enhance awareness and diversity among them.  It is this keen eye that lead her to pen her novel, A Good Hiding, published in August 2016. A Good Hiding tells the story of two friends, 15-year-old Nollaig and her best-friend, Stephen. Nollaig has a traumatic home life with her alcoholic father. She has always been Stephens’ champion, defending him against bullies who lash out at him because he is openly gay. When Nollaig falls pregnant a few months before her 16th birthday, she runs away, hiding herself in the crypt of a local church. Feeling she has nowhere else to turn, she prevails upon Stephen to keep her secret and help her. There, they come across the vicar of the church, Brian, who has a secret of his own and blackmail him into helping them. What follows is a dramatic and emotion tale of courage  and revelation told in a unique voice that shines a light into the lives of Shirley-Annes’ subjects and reveals something of the challenges and changes of Northern Irelands’ young people today.
Claire Hennessy is a very busy woman. Born in 1986 in Dublin, Claire attended Trinity College, where she completed a BA in history and English Literature, and Masters Degrees in Popular Literature and Creative Writing. She is a co-founder and co-director of the Big Smoke Writing Factory creative writing school in Dublin, teaches regularly for CTYI, reviews YA and childrens books for the Irish Times and other publications; is the co-editor and co-founder of Banshee literary journal and the Puffin Ireland editor at Penguin…the list goes on and on. As the author of numerous books for Young Adults, Claire regularly does author visits and writing workshops for schools, libraries and festivals.. She wrote her first novel, Dear Diary…. which was published by Poolbeg Press in February 2000. She was 14 years old. Claire hasn’t stopped writing since, with nearly a book year…sometimes two. Her last outstanding book, Nothing Tastes As Good was published by HotKey in July 2016. Tackling the prevalent and timely issue of eating disorders and body image with clear and compassionate perception, Nothing Tastes As Good is told in the unique, fascinating voice of Annabel. When we meet her, Annabel has died as the result of anorexia, and now exists in a liminal space. She is given the assignment of helping Julia without any direction as to what she is meant to do. To Annabel, who spent her abbreviated lifetime seeking to be ‘lighter than air’, Julias’ problem is obvious. But as Annabel cannot communicate with her directly, she becomes the ‘voice in her head’, attempting to guide Julia along a strict regime of exercise and weight loss.Clearly,  Annabel still hasn’t come to terms with her own issue. With carefully crafted plot and character development, the story is woven, frayed and re-woven, coming to a resolution that, though not cut and dried, is filled with potential. Her latest book, Like Other Girls, will be published by HotKey in May and promises to be just as insightful and incisive as her last.
And now we have Dave Rudden. What can I say about Dave Rudden? Dave received a Masters Degree in Creative writing from University College Dublin, earning him first-class honours. He has also been short-listed for the Bath Short-Story Prize in 2013, long-listed for the Fish Poetry Prize and won the Fantasy Review Short-Story Prize in 2011. After having international publishers battle it out over rights for his unique, exciting fantasy trilogy, the first in the series Knights of the Borrowed Dark was published by iconic Puffin last year in April. This brought a new unlikely hero, Denizen Hardwick into our lives. The orphaned Denizen finds himself flung into an ancient battle between the magic-wielding Knights and a race of monsters, the Tenebrous, composed purely of darkness. This year, Denizens' journey continues in The Forever Court, with more knights, more monsters and more menace. The world created is filled with texture and believeable quality, while the story is told with tension, drama and an enormous amount of humour. Not only is there a cracking fantasy story, but typical issues and concerns of coming-of-age process; friendship, loyalty, family relationships and issues of power and responsibility are handled with great dexterity. The effect is one that truly begs the question, if you're afraid of the dark, what is the dark afraid of?