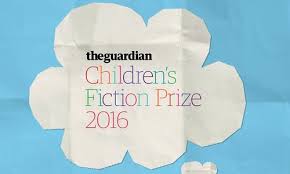 The shortlist for the Guardian Childrens Fiction Prize was announced today. The four authors listed have demonstrated incredible excellence in the field of childrens' literature.

Tanya Landman has a brilliant backlist of work and is no stranger to such nominations and awards,

having taken the 2015 Carnegie Medal for Buffalo Soldier. She is nominated for the Guardian for her latest book, Hell and High Water, set in 18th-century
England. It is one of two historical novels up for the prize; the other being Brian Selznicks' wonderful book, The Marvels. The Marvels interweaves a story told in illustration that begins in 1766 with a lone survivor of a shipwreck with a text story in 1990 about a boy who runs away from school to the house of his uncle.

Also shortlisted are two contemporary novels. Crongton Knights by Alex  Wheatle is set on a fictitious council estate and follows the adventures of McKay during the course of one night. And finally, Bone Sparrow by Zana Fraillon tells the poignant, eye-opening story of Subhi, a young boy who has spent his entire life in a refugee detention centre.
All are very powerful contenders for one of the most important awards in childrens' literature today.


The winner will be announced on 17 November.