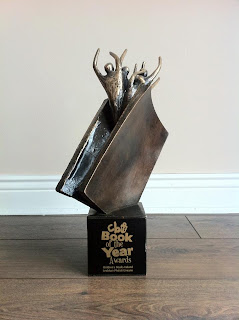 A huge congratulations to Sheena Wilkinson, whose brilliant book Grounded has won the 23rd CBI Book of the Year Award! AND, not only has Sheena taken the overall book of the year award, but she is the second ever author to win this along with the Children's Choice Award. " Grounded is the sequel to Taking Flight, which on both the CBI Honour Award for fiction and the Children's Choice Award in 2011.
The judges said that the books' "‘this powerful first person narrative is an unsentimental account of a teenager trying to cope with a series of unexpected responsibilities, and explores the effects of caring too much and of caring too little.
Now.... on to the other award winners for 2013:
The Eilís Dillon Award is awarded to a first time author or illustrator. The award in this category went to The Weight of Water by Sarah Crossan. Written in first-person narrative verse, this stunning coming-of-age novel deals with all the isolation, loneliness and confusion felt by many young immigrants and the strength and fortitude with which they face their circumstances.
The Judges Special Award was won by Anna Heussaff for her Irish language children's novel Hóng.
The Honour Award for Illustration went to none other than Oliver Jeffers for the wonderful, thought-provoking and entertaining picture book, This Moose Belongs To Me.
The Judges Honour Award for Fiction went to Dark Warning; a haunting, moving novel set in late 18th century Dublin by Marie-Louise Fitzpatrick.
Congratulations to all of you!
http://www.childrensbooksireland.ie/blog/cbi-book-of-the-year-awards-winners/