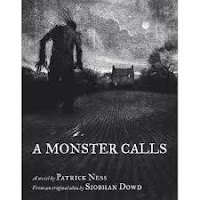 A Monster Calls has been awarded  the Red House Children's Book Award 2012. The Red House Book award is unique in that it is voted for only by young readers from a shortlist drawn up by children's book groups across Britain. Over 80,000 votes were cast this year and the winners were announced at an awards ceremony at the South Bank centre as part of the 2012 Image Festival. Big congratulations to Patrick Ness!
http://www.guardian.co.uk/childrens-books-site/2012/feb/18/red-house-award-2012